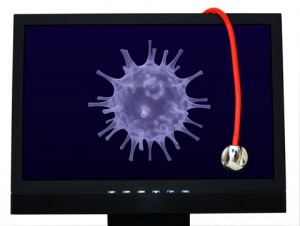 I come back on the ‘viruses’ to answer a question from a reader: The antivirus cost a lot and, even if you keep them up to date, they let pass unwanted objects. Why and what can we do?

You don’t need to visit ‘dubious sites’ to get a malware. It can be latent in an office automation work file, in a downloaded or bought software (on CD or DVD) – if this still exists, or in a downloaded picture, film or music!

There are 3 reasons why the antivirus software don’t stop everything:

There are 3 ways to get a malware:

The payload and its effect

It’s seldom how you get the malware that’s the real problem. It’s its payload and the effect it has on your computer that matters.

If I gave a name to the effects to be easily understood, these effects are actual whatever their name:

The creators of malware put all their energy in means to prevent their jewel to be detected and stopped.

The cause of antivirus malfunction

The issue with viruses and malware is the integrity of your computer, its data and software. They are always modifications to existing files, or the contribution brought by unasked files. The solutions: recover from your backups.

One can never know in advance if a downloaded file is clean or not.

In enterprises, we generally recommend to install one antivirus technology on the servers (eg. files and mails) and the other one on the workstations. It allows one system to detect what the other missed. If you look for an antivirus with both functionalities, you’ll have to pay the price.

Another idea is to make at one time a copy of the content of your computer (programs and data) and to regularly verify if the current content is always identical to the stored reference, and to use your backups.

You can’t do much for the ‘gifts’. It’s a question of trust and mistrust. Where do you put the limit?

Everything is then a question of consciousness and caution …that, also, is insufficient.

The zero risk is a myth… a vaccine is no total immunity insurance.

The best companion of your antivirus is the firewall of your computer – I’ll come back on this – and I already wrote that, this also, is insufficient.

Do you now understand why your antivirus software isn’t watertight? Do you know what to do?